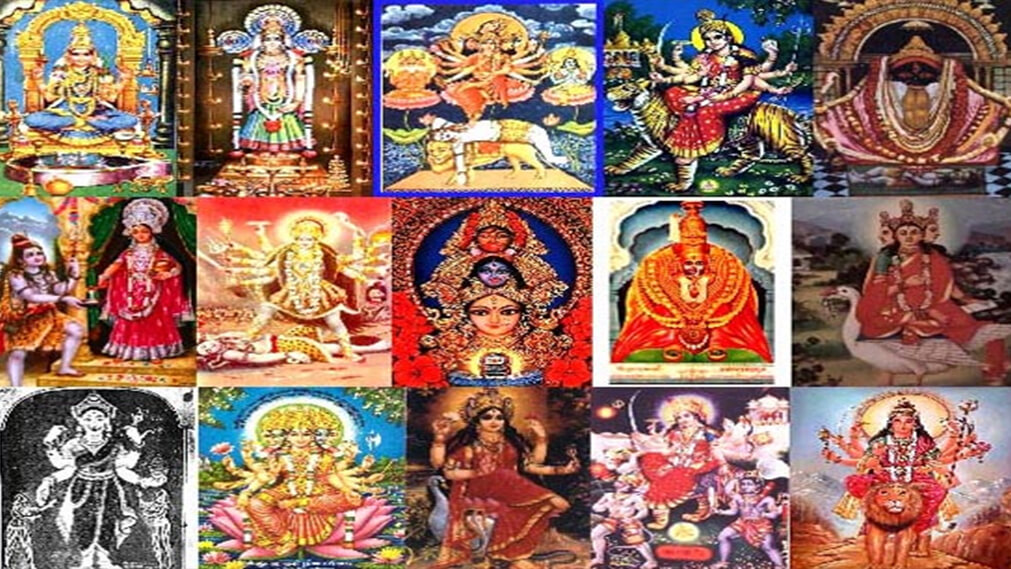 The feminine divinity in Hinduism, called Shakti, is seemingly the greatest creative force. Indians across the globe celebrate the powerfulness of Shakti through various festivals such as Navratri, Kali Puja, Durga Puja.

The story behind Shaktipeeth:

According to Hindu mythology, Brahma’s son, King Prajapati Daksha, had a daughter named Sati, who grew up hearing and adoring the tales of Shiva. When she turned to the age of getting married, she knew that it was around Lord Shiva of Kailash where her heart and soul rested.

Soon, Sati left her father’s luxuries and began meditating to win Shiva’s heart. She performed penance in dense forest and abandoned food completely. Looking at her austerities, Shiva was pleased enough to appear in front of her and agreed to marry her.

Shiva and Sati were happy in their marital life, but their marriage did not go well with King Daksha, who did not find Shiva worthy of his daughter. So, when Daksha organized a Yajna, he invited all the gods, deities and sages but excluded Shiva, his son-in-law, to insult him. Hurt by her father’s decision, Sati questioned him. However, she was bombarded with insults of Shiva. Calling him a dishevelled god who hung out in graveyard to calling him lord of beasts, Daksha went on with insults. Unable to hear anything against her husband, Sati surrendered herself to the fire of Yajna.

As the nation celebrates Navratri and Durga Puja this year, we take a look at the most famous Shakti peeths or pilgrim spots in the Indian subcontinent.

If you’re in the mood for some Devi darshan, or plan to go on a pilgrimage, these are the places you must visit.

When Shiva was informed about the demise of his wife, he enraged and created veerbhadra out of his hair lock. Veerbhadra created havoc at Daksha’s palace and killed him.

Mourning his wife’s death. Shiva tenderly held Sati’s body and started the dance of destruction. To save the universe, bring back Shiva’s sanity, Lord Vishnu used Sudarshan Chakra and cut Sati’s body into 51 pieces. Sati’s remains fell into various places, which now are called as Shakti Peeths. They are considered holy lands and pilgrimages.

One of the most popular pilgrimages in India, Amarnath is located in Anantanag, Jammu & Kashmir. This temple opens for darshan in July and August. The throat of Sati is said to be fallen here.

Located in Attahasa Village, Birbhum, West Bengal. It is obligatory to offer sour eatables whenever bhog is offered to the Shakti.

Located on the banks of Ajay River, this holy land is situated in Ketugram,, Katwa of Bardhaman district in West Bengal.

Located on the banks of Paaphara River  Siuri town, this tmple is known for its healing powers.

This peeth is located near Ujjain in Madhya Pradesh at the Bhairav hills on the banks of Shipra River.

Located in the Sherpur Village of Bangladesh.

In the Godavari river valley in the Nasik city fell both parts of the chin of Goddess Sati. Devi is known as Shakti Bhramari or Chibuka (meaning Chin) here.

Sati’s   Bhrahmarandhra (top of the head) fell in Hinglaj, around 125 kms away from north-east of Karachi. The goddess here is in the form of Shakti  Kottari.

Dedicated to Kaali Maa, this is located in Khulna district, Bangladesh.

Situated  in Kangra Valley in Himachal Pradesh, this was discovered by Pandavas. Devi resides here in the form of flame, which miraculously keeps burning even under the rocky layers.

Located in Kolkata,. Kalighat is the site where Maa Sati’s toes of the right foot had fallen.

One of the fieriest incarnations of Goddess Sati is Maa Kamakhya.  Situated in Neelgiri in Guwahati, Assam., this Shakti Peeth is closed for three days during June/July, when the menstrual cycle occurs. Angabastra is used to cover the Yoni-stone of the Devi.

Located on the banks of Kopai River, West Bengal, this temple is locally known as Kankaleshwari.

This famous temple is located in Kanyakumari, Tamil Nadu.  Devi is in the form of Shakti Sravani.

In the Chamundi Hills of Mysuru is the Shakti Peeth where both the ears of Sati had fallen.

Crown of Sati had fallen in Kireet, near Lalbagh court road of Murishabad district in West Bengal.

Locally known as the Anandamayee Temple, Kumari Shakti Peeth is situated on the bank of Ratnakar River in Khanakul, West Bengal.  Here, right shoulder of goddess Sati had fallen.

This Shakti Peeth is on the bank of Teesta River in Jalpaiguri of West Bengal, and is locally known as Bhramari Devi Temple.

This Shakti Peeth is located near the foot of Kailash Mountain in Mansarovar, Tibet, China. It is in the form of a stone slab.

Situated near Pushkar at the Gayatri Hills in Ajmer, Rajasthan, this Shakti Peeth is where two manivediakas or wrists of Sati had fallen.

Near the Janakpur Railway Station on the border of India and Nepal lies Mithila, where the left shoulder of Sati had fallen

This Shakti Peeth is in Nainativu, Manipallavam, 26 kms from the ancient capital Jaffna, Nallur in Sri Lanka.  The idol of the goddess is  believed to made by Lord Indra and was worshipped by both Lord Rama and King Ravan.

Situated near Pashupati Nath Temple, Kathmandu, Nepal, this temple is where both the knees of Maa Sati had fallen.  The temple was built by King Pratap Malla in the 17th century.

Situated on the top of Chandranath hills near Sitakunda station, this Peeth is in Chittagong, Bangladesh.

Located near Varanasi in Uttar Pradesh, this Shakti Peeth is dedicated to “Maa Varahi”.

It is said that the stomach of goddess Sati fell in Prabhas-Khetra, near Somnath Temple in Junagrah, Guajarat’s.

The temple is situated at the Trikoota hill, Satna, Madhya Pradesh

Located in Sainithia town in Birbhum district of West Bengal, this temple is where the necklace of Maa Sati had fallen.

This Shakti Peeth is located at Kotilingeswar temple on the banks of Godavari River.

This Shakti Peeth is situated near the Parkai Railway Station, near Karachi in Pakistan.

At the source point of Narmada River, at Shondesh in Amarkantak of Madhya Pradesh fell the right buttock of Goddess Sati.

Located in Tripurantakam, Sri-Sailam in Andhra Pradesh, this Shakti Peeth is where the right anklet of Maa Sati fell.

The Shakti Peeth is located at Sri Shail at Jaunpur Village in Bangladesh.

This temple is located at Suchindram, which is 11 kms on the  Kanyakumari  road of Tamil Nadu.

Situated on the banks of river Sonda, Shikarpur is 20 km away from the Barisal town in Bangladesh. Here, the devi is known as Maa Sunanda or Devi Tara.

Situated in Radha Kishorepur Village, few kms away from the Udaipur town, Tripur Vairavi Shakti Peeth is where the right foot of Sati had fallen. The goddess is in the form of Devi Tripur Sundari.

Located at Ujjani village in Guskara station of Burdwan district, West Bengal, this Shakti Peeth is where right wrist of Devi Sati had fallen. She is worshipped here as Devi Mangal Chandika.

This temple is located in Manikarnika Ghat, in Varansi, Uttar Pradesh. It is where the earrings of Goddess Sati had fell. Devi is worshipped here as Vishalakshi and Manikarni.

Located in Tamluk in Medinipur district of West Bengal, this Shakti Peeth is where the left ankle of goddess Sati had fallen. Goddess is worshipped as Kapalini.

It is believed that the fingers of left feet of Goddess Sati fell in the Biraat Nagar, Bharatpur district of Rajasthan. Sati is worshipped here as Ambika Shakti.

In the Bhooteswar Temple in Mathura district of Uttar Pradesh lays this Shakti Peeth. The goddess Sati’s ringlets of hair is said to have fallen here. The goddess is worshipped as Devi Uma.

Guarded by the Aravalli Hills from all sides, this gorgeous temple is situated in Gujarat. The temple is located on the peak of Gabbar Hill. It is said that the heart of Sati Devi’s fell here.  Aadi Shakti appears here as Goddess Amba.

Situated in Deogarh in Jharkhand, Baidyanath Jayadurga Shakti Peeth is one of the most revered temples of India. It is the temple where Goddess Sati’s heart had fallen and she is worshipped as Jai Durga.

Located in Chhattisgarh, Danteshwari Temple is dedicated to Danteshwari Devi.  It is believed that Goddess Sati’s tooth fell here when Lord Shiva was carrying her charred, lifeless body around the earth.

This Shakti Peeth is located in Jajpur, near  Bhubaneswar. This Peeth is also known as Nabi Gaya as the Nabhi (Navel) of Goddess Sati fell here.

One thought on “Shaktipeeth”